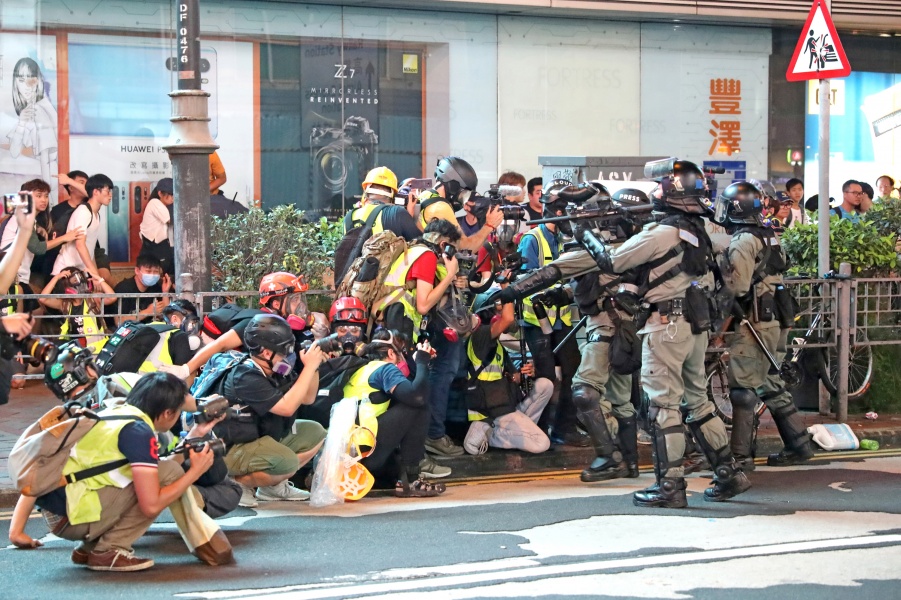 A police officer points his gun at journalists in Mong Kok—a major shopping area in Kowloon, Hong Kong—during ongoing protests in October 2019. The protests began in opposition to a proposed law that would allow extradition to mainland China, but have since evolved to calls for democracy and investigations into excessive use of force by police. Protesters are fighting to maintain the rights and freedoms in Hong Kong as mainland China seeks to expand its influence and control.

As the protests continue in Hong Kong, journalists are facing increasing hostility and law enforcement action. Several journalists have been arrested and many more injured. One journalist was permanently blinded after being hit by a rubber bullet fired by a police officer at relatively short range; she was standing with other journalists with high-visibility press markings, filming the protests from an overpass. The Hong Kong Journalists Association (HKJA) noted that press freedom has reached a new low, limiting journalists’ ability to cover stories and therefore the public’s ability to stay informed. The HKJA filed a judicial review against the police force for obstructing journalists and use of excessive force. Many other media and human rights organizations outside of Hong Kong have called on law enforcement to cease targeting of journalists and to respect free speech and the open media.