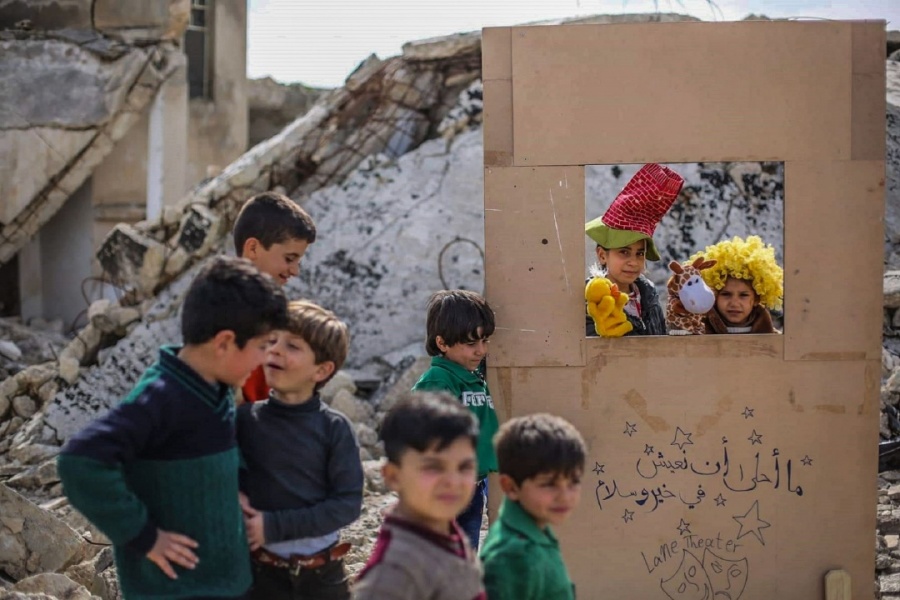 This photograph, captured in 2018, shows young children in Eastern Ghouta, Syria performing a puppetshow amidst buildings and debris destroyed by war.

The Syrian Civil War began in 2011 with widespread civil unrest and protests against the government in the wake of the Arab Spring. The conflict quickly evolved and grew to involve both foreign governments and local armed groups. The full scale of casualties is still unconfirmed, but estimates suggest well over 400,000 people have been killed, almost half civilians. The atrocities and scale of fighting contributed to one of the world’s largest refugee crises; 13.5 million Syrians were displaced over the course of the war, almost half fleeing to neighbouring countries.

As a rebel-held area, Eastern Ghouta quickly became a target for Syrian forces; it was under siege for five years, from 2013 to 2018. The siege led to the displacement of 100,000 people and over 12,000 civilian casualties. As the government regained control, over 50,000 were evacuated to rebel-held Idlib. The United Nations has condemned the atrocities against civilians as war crimes, including indiscriminate shelling and the use of chemical weapons.

Since the end of hostilities, life is returning to the region; markets are bustling and children create games amid the rubble, but recovery is slow. Many survivors are still dealing with the atrocities and destruction they witnessed, and others are returning to find their homes destroyed. Jobs are scarce, and the widespread destruction of critical infrastructure leaves many without consistent access to water and electricity. The region used to be the capital’s primary food source, but more than 80% of its trees have been lost, and the reconstruction process will be long and painstaking.