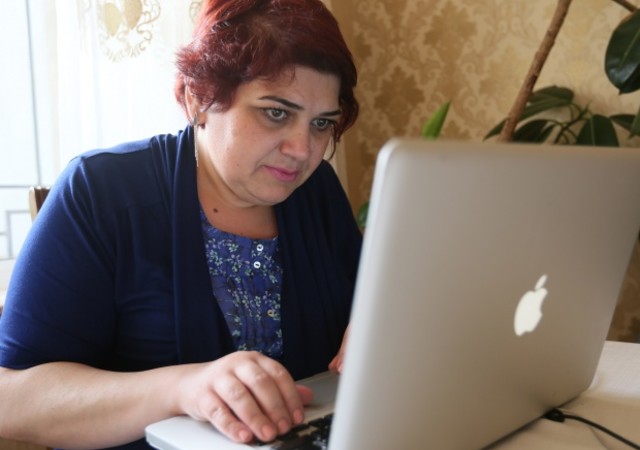 As an investigative journalist in Azerbaijan, Khadija Ismayilova is well-known for challenging corruption and misuse of power at the highest levels of government. Working with Radio Free Europe and the Organized Crime and Corruption Reporting Project (OCCRP), Khadija has won numerous press-freedom awards and international acclaim for her investigative reporting in a country known for exercising strict control over its media.

In 2012, Khadija worked with two Czech journalists to uncover foreign companies and luxury real estate held by a number of high-ranking Azerbaijan officials and their families, an investigation that provided a rare public glimpse into the rampant corruption in Azerbaijani politics, even prompting the National Assembly of Azerbaijan to change its disclosure laws to hide from further inquiry.

Khadija’s stories earned her investigative reporting awards in 2010 and 2011 from Radio Free Europe/Radio Liberty, where she had served as the chief of Baku Bureau from 2008 to 2010. But her tireless search for truth made her some powerful enemies. In 2012, she was blackmailed by someone who had placed a video camera in her home and threatened to publically humiliate her if she didn’t “behave.” She refused to be silenced, so the video footage of her intimate life was published. When the government’s investigation of the blackmail was deemed inconclusive, Khadija commenced her own investigation and established that state agencies had wired her apartment.

In 2013, she was arrested for an unsanctioned protest and sentenced to 220 hours of sweeping the streets (something she said pleased her, because she was used to “clearing this country of rubbish”).

In 2015, Khadija was given a 7.5-year prison sentence for a list of financial crimes the government had fabricated to silence her, inspiring her colleagues at the OCCRP to start the “Khadija Project” to finish her investigative reporting projects. Following outcry from the international community -- including Reporters Without Borders, the U.S. Department of State, and Amnesty International -- Khadija was released on probation in 2016 and remains under a travel ban until 2021. She continues to fight against human rights abuses and corrupt practices in government, and her courage and leadership have earned her broad popular support, inspiring a new age of political activism in Azerbaijan.

In 2017, Khadija was involved in the Azeribaijani Laundromat investigation, which exposed a slush fund of over 2.5 billion euros used by members of Azeribaijan's government to pay off European politicians, buy luxury goods, launder money, and otherwise benefit themselves.

"Being selected as a finalist for this prize was a surprise to me. For me it is an acknowledgement of the struggle journalists and activists in Azerbaijan carry out day by day to expose corruption. Azerbaijan is a country where corruption is endemic, and corrupt officials enjoy impunity. Our stories do not lead to criminal investigations against corrupt officials, because as my investigations exposed, those who are on the top of the system are also leading the main corruption schemes. My hope is that one day we will have [a] strong enough society to demand justice in all corruption cases, including for those in the highest positions of the hierarchy. Writing and exposing corruption is not enough. We need to engage local and international legal mechanisms to make our exposures more meaningful. [The] Allard Prize might help me to start one of these initiatives."

"Those who expose it are subject to all kinds of harassment. I didn't pay the highest price - Elmar Huseynov, [a]  journalist, assassinated in 2005 did. My share of "punishment" was a blackmail-and-arrest smear campaign by the government officials. Nevertheless I do not regret, because I am happy to see that despite all the troubles our work can bring, there are [a] number of younger journalists who want to do the same. Some of them do it anonymously because of the threats of being arrested, beaten or blackmailed. They are my inspiration. I dedicate this acknowledgement to my students and colleagues - to journalists, who investigate and expose corruption openly or anonymously despite threats."