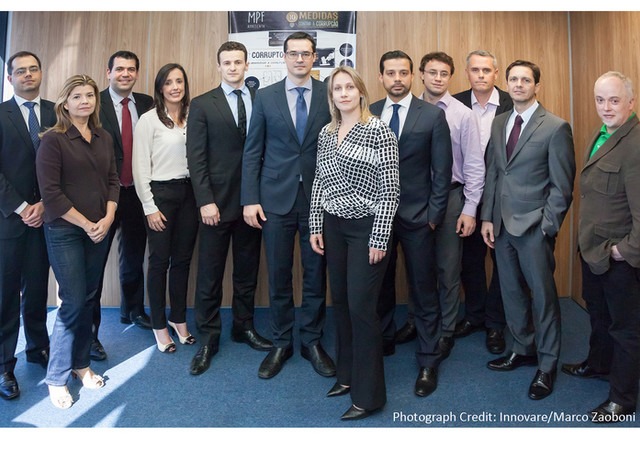 Beginning as a local money-laundering investigation in 2014, Operation Car Wash grew into the largest anti-corruption campaign in the history of Brazil and, perhaps, the world. The Car Wash Task Force has been responsible for billions of dollars in recovered bribes, and criminal charges against hundreds of political and corporate operatives, changing the nature of Brazilian politics and its culture of criminal impunity.

The operation centered on a scandal surrounding Petrobras, Brazil’s state-run oil company. Prosecutors discovered that large construction and engineering firms paid more than $2 billion in bribes in exchange for lucrative contracts of Petrobras. The money was used to support a number of political campaigns that kept prominent officeholders in power and for their illicit enrichment.

Over time, prosecutors and federal police uncovered a network of corruption that ran through the Brazilian Democratic Movement Party, the Progressive Party and the governing Workers’ Party, as well as a host of major corporations whose top-level officers were involved in the kickback scheme. More recently, investigations spread over many offices of the federal, state and municipal governments, involving hundreds of politicians of more than 25 political parties.

Ultimately, federal police arrested a sitting Senator, six former Congressmen, a party Treasurer, and some of Brazil’s most powerful executives, bringing charges against 280 people and dispensing more than 1500 years worth of criminal sentences. Criminals and companies have agreed to give back more than $3 billion, in a country where no cent is recovered in criminal cases in general.

In 2015, Marcelo Odebrecht, the CEO of Latin America’s largest construction company, Odebrecht S.A., was sentenced to 19 years in prison for his role in the scandal, and ultimately the company, in a joint resolution with another company, Braskem S.A., involved in the scheme, agreed to pay back more than $2 billion in a resolution led by the Task Force with help from authorities in Switzerland and the United States. This was the largest corruption penalty ever levied by global authorities.

The Car Wash Task Force was awarded the Transparency International Anti-Corruption Prize in 2016. Having exposed the shady underbelly of Brazilian politics, success gave the team the firepower to push for legislation that would help public officials and law enforcement prevent, root out, and prosecute corruption in its public offices. By bringing to justice dozens of high-ranking officials and executives who many thought were untouchable, the Car Wash Task Force has brought about a new era of integrity and accountability in Brazil.

"I [Deltan M. Dallagnol] feel very much honored for being part of a huge team working on the Car Wash case. Because the struggle against corruption in Brazil goes much beyond the Task Force, I would like for each public servant and citizen who contributed to this case and to the cause to feel that this nomination is also recognizing her contribution. More than that, I want them to feel that they have the support of millions of citizens of the world, represented by the Allard Prize community, who are in solidarity with regards to the pain and suffering that corruption causes people everywhere. Finally, I also feel grateful to the Allard Prize, since the selection of the Task Force amongst the finalists renews our strength in this long-term battle."

"Much more than punishing the persons who committed corruption, which is of course a matter of Justice, what inspires me is a humanitarian motivation. Behind the faces of corrupt public employees, politicians and businessmen, there are millions of Brazilian citizens, people of flesh and blood, who suffer the consequences of corruption. It is all about loving our people. I am talking about people who are dying in the lines of Health Care Institutions, waiting to be taken care of. Persons are injured everyday in accidents caused by road potholes. Young people do not have opportunities because the educational system was stolen. In Brazil, more than 35 million people do not have access to tap water and more than 100 million do not have access to the sewage system. All this drives me to do my best in my job and as a citizen to make a difference."