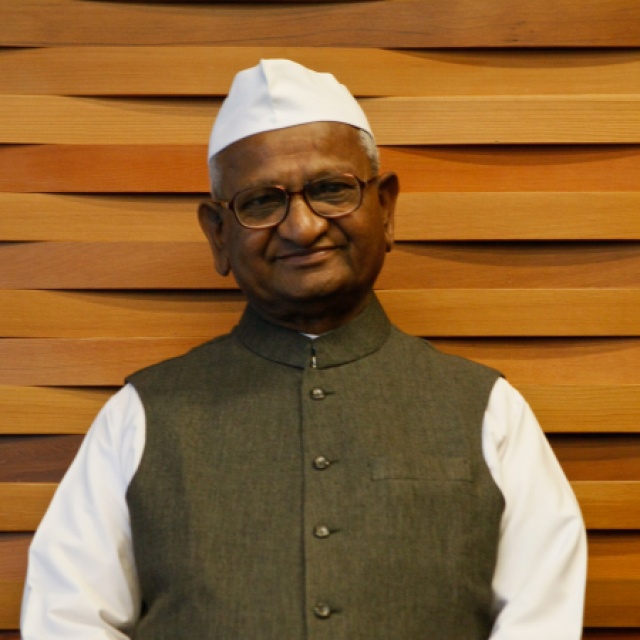 Anna Hazare is one of India’s most renowned social reformers.  Mr. Hazare had led successful movements to advance rural development, enhance government transparency and investigate and prosecute official corruption.  He has also played a leading role in educating people in India about their fundamental rights and encouraging them to raise their voice against unlawful practices like corruption.

Mr. Hazare began his path to promote human rights by dedicating himself to improving conditions in the rural Indian village where he was born, Ralegan Siddhi. Mr. Hazare has campaigned tirelessly for transparency on state and national levels. In 2003 he led a movement that successfully influenced the Maharashtra state government to enact a revised Maharashtra Right to Information Act, which became the basis for the Right to Information Act later adopted by the national government. In 2011, he led a national apolitical movement dedicated to eradicating illicit practices across India.That same year he led a series of hunger strikes and successful massive public demonstrations to urge Indian legislators to adopt legislation to create an independent ombudsman body with the power to investigate any public official.

In his words, “I have dedicated my life in the service of the people. I believe, service to humanity, is in real sense, the worship of god.”

Upon being awarded the Allard Prize, Mr. Hazare said: “My life-long mission to fight corruption and promote transparency is stronger for having received this award. I have never been attracted to money and wealth, but the Allard Prize will help me and all those that are working towards the same cause to continue the fight. I am hopeful that this international recognition will promote a movement for change that will endure beyond my lifetime for generations to come."