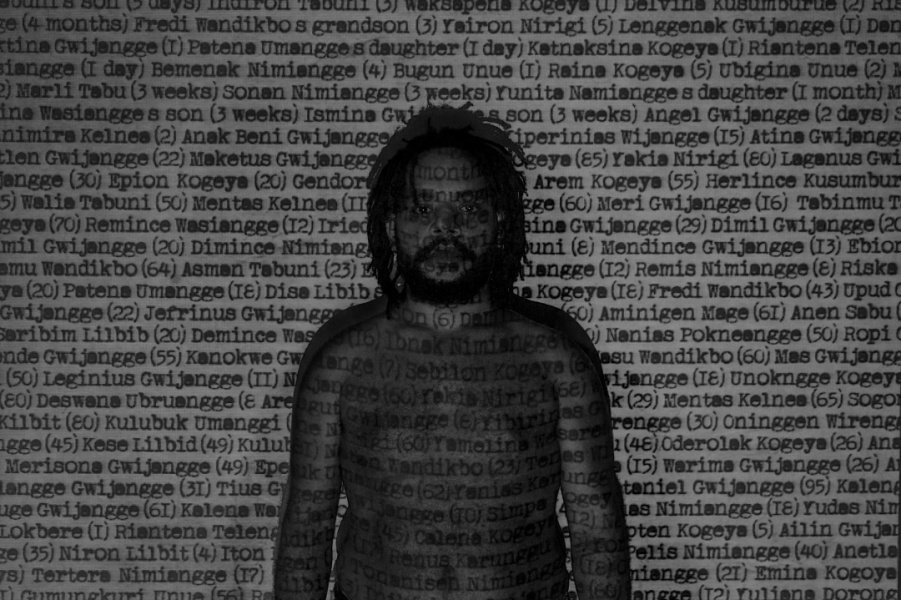 Robert William poses with the projected names of those who died during the ongoing militarization of West Papua, Indonesia. In November 2020, Williams’ cousin, Ronny Wandik, was allegedly killed by Indonesian security forces in Papua’s Mimika district.

West Papua, which comprises the Indonesian provinces of Papua and West Papua on the western half of the island of New Guinea, is one of the most remote and undeveloped places in the world and home to more than 5 million, including people from over 400 tribes who speak more than 250 languages. Indonesia has controlled West Papua since 1963, after it gained independence from Dutch colonial control. Indonesia formally integrated West Papua as Indonesian territory following a 1969 vote, which separatists reject as undemocratic and illegitimate; only 1,025 indigenous elders, who were selected and intimidated by the military, were permitted to vote, from a population of over 800,000. Since then, the ongoing power struggle between the Indonesian government and Papuan separatists has kept the region in a precarious cycle of conflict and violence.

The United Liberation Movement for West Papua claims that more than 500,000 indigenous Papuans have been killed in the colonization of the territory since 1963. Human rights groups report that renewed calls for independence since 2018 have led Indonesian security forces to tighten their control over the region. International groups have reported that more than 500 civilians have died and more than 60,000 have been displaced since the conflict escalated in December 2018, but these numbers are likely higher. Estimates are difficult to confirm as the Indonesian government has prohibited journalists, foreign researchers, and United Nations officials from entering West Papua over the past several years.