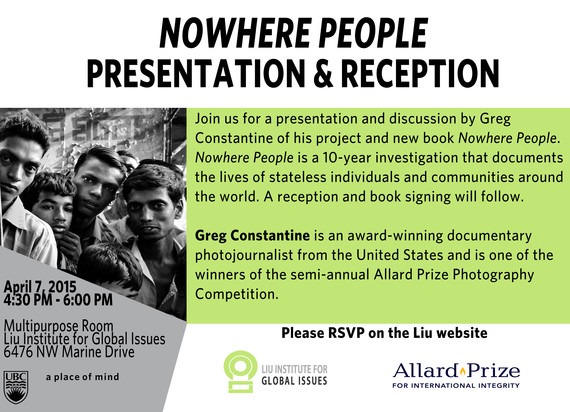 Join us for a presentation and discussion by Greg Constantine of his project and new book Nowhere People. Nowhere People is a 10-year investigation that documents the lives of stateless individuals and communities around the world. A reception and book signing will follow.

Greg Constantine is an award-winning documentary photojournalist from the United States and is one of the winners of the semi-annual Allard Prize Photography Competition.

Everyone is welcome. Please RSVP.

The Nowhere People project documents individuals and ethnic communities around the world who have had their citizenship stripped or denied from them by governments (mostly because of discrimination, racism & intolerance) and as a result, are denied almost all fundamental rights, do not have citizenship to any country and are stateless. The third and capstone book of the project, Nowhere People, was published in November 2015.  The book was named a Notable Photo Book of the Year by PDN and was also named one of the 10 Best Photo Books of 2015 byMother Jones Magazine.

Bio: Greg Constantine is an award-winning documentary photojournalist from the United States. In 2005, he moved to southeast Asia and began work on his long-term project, Nowhere People, which documents the struggles and plight of stateless communities around the world. Constantine has spent the past ten years documenting stateless communities from Bangladesh, Myanmar, Nepal, Malaysia, Sri Lanka, Kenya, Ivory Coast, Dominican Republic, Ukraine, Serbia, Italy, Iraq, Kuwait and Lebanon. His work has been featured in various publications including the New York Times, International Herald Tribune, Newsweek, The Atlantic, CNN and Al-Jazeera.

In 2011, a series of books from the Nowhere People project was released with the aim of not only chronicling and spreading more awareness of the plight of stateless people but also to help engage policy makers. Kenya’s Nubians: Then & Now was published in 2011. Exiled To Nowhere: Burma’s Rohingya was published in 2012 and was named a Notable Photo Book of the Year by the Independent on Sunday in the UK and by the editors of PDN Magazine. Nowhere People is the third book in the series.

Download his full bio and a description of Nowhere People.