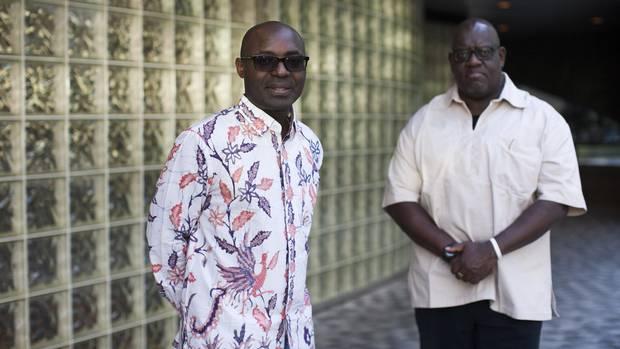 Two African journalists known for exposing corruption in their respective countries of Kenya and Angola have been named the joint recipients of the 2015 Allard Prize for International Integrity.

The Peter A. Allard School of Law at the University of British Columbia presented John Githongo and Rafael Marques de Morais with the Allard Prize at a special ceremony last night.

The $100,000 prize is one of the world's largest awards recognizing efforts to combat corruption and to promote human rights. As joint recipients, Mr. Githongo and Mr. Marques de Morais were each awarded $50,000 for their brave efforts in protecting human rights and fighting corruption.

"It is a singular honour and a humbling experience to be selected for the Allard Prize," says Mr. Githongo. "This recognition serves as an encouragement and as an important recognition that there is across the world a partnership between all people who care about human dignity - to fight corruption and theft and their toxic effects."

In 2004, Mr. Githongo was responsible for exposing a $1 billion corruption scandal within the Kenyan government. His current work is focused on creating an informed citizenry in Kenya and mobilizing its people to speak out against corruption.

"At home I am vilified for fighting corruption, and abroad I am recognized for doing it," said Mr. Marques de Morais. "It is an exceptional encouragement for me to continue to do my job. It (the prize) will resonate in Angola, as a testament that it merits to fight against corruption in a kleptocracy. This award will further help change perceptions in Angola, where people are forced to engage in everyday corruption as a way of life.

Mr. Marques de Morais is an Angola-based human rights activist and journalist who has dedicated his career to raising public awareness of corruption, conflict diamonds and army brutality in his home country. Despite threats to his life, lawsuits and an unjust prison detainment, Mr. Marques de Morais continues to write extensively on these topics.

Established in October 2012 by Allard School of Law alumnus Mr. Peter A. Allard, Q.C., the Allard Prize is awarded every two years to an individual, movement or organization that has shown exceptional courage and leadership in combating corruption, especially through promoting transparency, accountability and the Rule of Law.

"We are honoured to present the 2015 Allard Prize jointly to John Githongo of Kenya and Rafael Marques de Morais of Angola, in recognition of their extraordinary efforts to combat corruption and protect human rights," said Mr. Allard. "Their stories, which clearly reflect the values of the Allard Prize, inspire all of us to effect positive change for the benefit of people everywhere."

The other finalists, Indonesia Corruption Watch, Indonesia's leading organization focused on fighting corruption, and Sergei Magnitsky, the late lawyer who was responsible for uncovering a large-scale government tax fraud in Russia, were each awarded $10,000 in recognition of their efforts in protecting human rights and fighting corruption.

“The Allard Prize holds a very special place in the heart of the Allard School of Law,” says Dean Catherine Dauvergne.  “It recognizes the law school’s longstanding commitment to human rights, and its commitment to making real change happen in the world.  We are grateful for the generosity of Peter Allard that makes this award possible.”

The Allard Prize for International Integrity

Established in October 2012 and funded by alumnus Peter A. Allard, Q.C., the Allard Prize for International Integrity is awarded to an individual, movement or organization that has shown exceptional courage and leadership in combating corruption, especially through promoting transparency, accountability and the Rule of Law. After a comprehensive nomination and selection process, four finalists were selected from 146 nominations from 53 countries around the world.

The Allard Prize for International Integrity was created by Peter A. Allard, Q.C., as part of his 2011 gift of $11.86 million to the law school. This gift also supported the creation of the Faculty’s new home, Allard Hall. On January 22, 2015, UBC announced a further, transformational $30 million gift from Mr. Allard.  Mr. Allard's gift is the largest ever to a Canadian law school.  In recognition of this gift, which will enable the Faculty to build on its reputation for championing human rights, the university named the law school the Peter A. Allard School of Law.

Throughout his career as a lawyer and businessman, Mr. Allard has assumed leadership roles in human rights, environmental advocacy and other philanthropic work. Mr. Allard graduated from UBC with a B.A. in History in 1968, and a LL.B. in 1971. After graduation, Mr. Allard practiced law and participated in various business enterprises. In 1993, he established the Highbury Foundation, which has assisted medical communities in B.C. and Alberta with support for research and the purchase of medical equipment. The Highbury Foundation has also made significant donations to colleges and universities across Western Canada for scholarships and building needs.

Peter A. Allard School of Law

The Peter A. Allard School of Law is committed to being one of the world's great centres for legal education and research. As part of an outstanding public university situated in one of the most open, diverse and beautiful places in the world, the Allard School of Law offers an inspiring environment that combines rigorous professional legal training with an awareness of the role of law in society.  Its faculty engages in research with national and global reach and provides students with some of the most extensive and innovative curricular opportunities of any Canadian law school. The law school offers strengths in many fields, including business law, international law, environmental and natural resources law, and Indigenous legal issues. Graduates have gone on to leadership positions in a broad range of spheres, from the legal profession, to government, public interest organizations, business and academia. http://www.allard.ubc.ca/