Junior Scholar Workshop at the Peter A. Allard School of Law

Junior Scholar Workshop at the Peter A. Allard School of Law 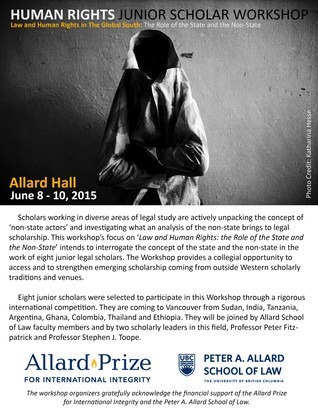 The Allard School of Law has established a Junior Scholar Workshop to stimulate the exchange of ideas and research among younger scholars in the academy on Human Rights in the Global South: The Role of the State and the Non-State. This transnational initiative to foster legal scholarship reaches out specifically to junior scholars working in countries of the so-called Global South. The Workshop encourages submissions representing a wide range of views, techniques and methodologies. At this point in history it is trite to suggest that the evolving role of non-state actors is transforming the landscape of human rights law. Yet despite repeated calls to incorporate the reality of non-state actor law-making in our accounts of human rights law, scholars are still struggling to incorporate this empirical insight in the emerging literature of law and human rights. How can human rights law be further enriched by a nuanced understanding of the ways in which non-state actors are both protecting human rights and preventing the realization of these rights? And what is the role of the state in protecting human rights in an era where security, immigration control and global trade appear to dominate state political agendas? This Workshop invites submissions on all these themes, including papers addressing the scope, impact and future of human rights as they apply to the corporate world.