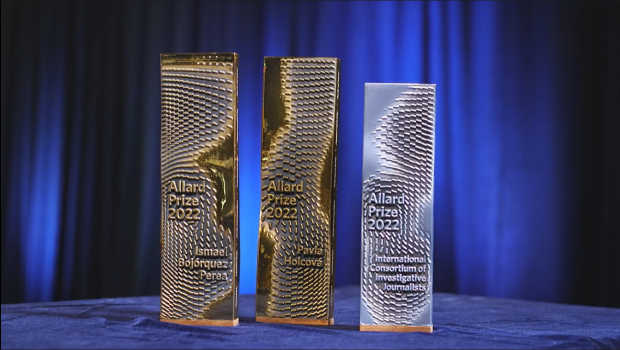 Investigative journalists Ismael Bojórquez Perea and Pavla Holcová were jointly awarded the 2022 Allard Prize for International Integrity at a virtual ceremony held today. The CAD $100,000 Allard Prize for International Integrity is awarded to an individual, movement or organization that has demonstrated exceptional courage and leadership in combating corruption or protecting human rights, especially through promoting transparency, accountability, and the Rule of Law. Each of the co-recipients was awarded a CAD $50,000 prize.

Ismael Bojórquez Perea is an investigative journalist based in Mexico. In 2003, Bojórquez co-founded Ríodoce, a weekly newspaper that reports on drug trafficking, crime, and corruption in Sinaloa. Due to the power of cartels in Sinaloa, Bojórquez and the Ríodoce team came under attack for their honest reporting, which shed light on the pervasive corruption and criminality in the region. The office has been targeted with intimidation, harassment, and violence, and Bojorquez himself was directly targeted by spyware. In 2017, Ríodoce co-founder Javier Valdes Cárdenas was murdered outside the Ríodoce office. Bojórquez vowed to be more cautious while renewing his commitment to investigative journalism. Bojórquez has been an outspoken voice in defense of journalism and press freedom and has criticized the government for failing to protect and defend journalists.

“It is a great honour to share this moment with the great journalist Pavla Holcova and with colleagues from the International Consortium of Journalists,” said Bojórquez. “Being here allows us to make this issue [of violence against journalists] more visible, which must continue to be discussed not only in Mexico, but outside our country as well.” Bojórquez expressed that the award must be shared with the entire Ríodoce team and dedicated the Prize “to the journalists who have been murdered and their families who, of course, are still seeking justice, and to the memory of Javier Valdez.”

Pavla Holcová’s work as a human rights defender and later as a journalist led her to uncover high-level corruption and criminality across the globe. In 2013, Holcová founded the Czech Centre for Investigative Journalism, an independent news outlet that contributes to other journalism initiatives, including the Organized Crime and Corruption Reporting Project (OCCRP). Together with her colleagues, Holcová has contributed to many ground-breaking investigations, including the Azerbaijani Laundromat and the Paradise Papers. Her work uncovering these criminal networks made her and her colleagues targets for smear campaigns, harassment, and violence. In 2018, Holcová’s colleague, Ján Kuciak, was murdered along with his fiancé while investigating a new story on corrupt dealings between the Slovak government and organized crime entities. Instead of silencing her, Jan’s death renewed Pavla’s resolve and she carried on with his investigation, determined to publish the story and demand justice for Jan. The investigation contributed to the fall of the Slovak government and led to several criminal investigations and charges.

“I am the lucky one,” said Pavla Holcová.“Unlike many of my friends and colleagues, I am alive. I am not in prison, I am not formally charged and prosecuted, I am not [in a war zone]”, said Holcová. “I deeply admire and respect my colleagues in countries such as Mexico, Russia, Ukraine, Serbia, Azerbaijan, and many many more.“ “Investigative journalism is a frustrating, depressing, and insecure job. That’s why I rely on my colleagues and people like you…that in case I lose my voice, someone will be there and will provide me with one.”

The other finalist, the International Consortium of Investigative Journalists (ICIJ) received an honourable mention award in recognition of their work. The Consortium is a network of 280 journalists worldwide who work collectively and contribute to large-scale investigative reports such as the Panama Papers and the FinCen Files, among others. ICIJ’s leadership and innovation in building collaborative journalistic infrastructure supports the development of journalists around the globe. Their investigations have been a catalyst for positive change, supporting the initiation of several criminal investigations and legal reforms.

About the Allard Prize for International Integrity

Established in October 2012 and funded by Mr. Peter A. Allard, Q.C. through The Allard Prize Foundation, the Allard Prize for International Integrity is awarded to an individual, group or organization that has demonstrated exceptional leadership and courage in the protection of human rights, while upholding the Rule of Law, promoting transparency and/or preventing or combating corruption.

Past Winners and Honourees of the Allard Prize

Lawyer at the Paris Bar

Member, International Board of Directors

The Allard Prize Committee also oversees the Photography Competition, which recognizes photographic excellence reflecting the ideals of the Allard Prize. Each winning entrant receives a C$1,000 cash prize and is featured on the Allard Prize website. Up to six photographs are selected every six months.

Throughout his career as a lawyer and businessman, Peter Allard assumed leadership roles in human rights, environmental advocacy and other philanthropic work. Mr. Allard graduated from the University of British Columbia with a B.A. in History in 1968, and a LL.B. in 1971. After graduation, Mr. Allard practiced law and participated in various business enterprises. In 1993, he established the Highbury Foundation, which has assisted medical communities in B.C. and Alberta with support for research and the purchase of medical equipment. The Highbury Foundation has also made significant donations to colleges and universities across Western Canada for scholarships and building needs, and to a broad variety of other charities including those engaged in the arts, environmental protection, animal protection, food support and community services, such as the YMCA. Mr. Allard’s transformational gifts to the University of British Columbia’s law school, the largest of their kind in Canada, resulted in the re-naming of the school to the Peter A. Allard School of Law.