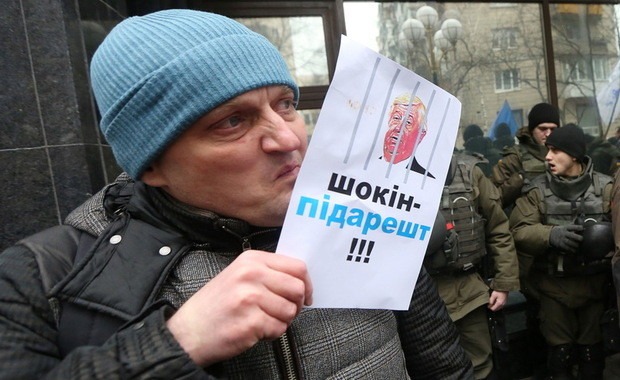 As the drive to fire Prosecutor General Viktor Shokin gains momentum, the discredited and distrusted official has opened an embezzlement case against one of the country's most prominent anti-corruption groups.

The investigation against the Anti-Corruption Action Center, which has consistently criticized Shokin's performance, will reignite the scandal around the prosecutor general. Critics say that the investigation is bogus and is aimed at putting pressure on the critical non-governmental organization.

Shokin's spokesman, Vladyslav Kutsenko, denied there was a political character to the investigation.

Shokin, a loyalist of President Petro Poroshenko, submitted his resignation in mid-February, but voting to approve it will not happen in parliament until March 29. A rally in favor of dismissing Shokin and appointing an independent prosecutor general is to be held in front of the presidential administration on March 28.

Kutsenko shocked the public on March 26 by saying that Shokin would remain prosecutor general after March 29, as there are not enough votes in parliament for his dismissal.

As the uproar over Shokin was intensified, Kyiv's Pechersky Court earlier this week gave the Prosecutor General's Office permission to seize Anti-Corruption Center's documents and other items, and allowed prosecutors to access the center's banking records, transactions and financial documents, according to the official register of court rulings.

The ruling was issued as part of an embezzlement investigation into money allocated by the U.S. government for reforming the prosecution service.

The Prosecutor General's Office said on March 16 that it would probe the alleged theft of U.S. grants worth $2.2 million allocated for a competitive hiring process for the prosecution service. Critics see the investigation as an effort to pressure Deputy Prosecutor General Davit Sakvarelidze, who oversees the reform.

Kutsenko’s allegations were denied by Geoffrey R. Pyatt, the U.S. ambassador to Ukraine. He said the funds were not intended to go to the Ukrainian government.

The Anti-Corruption Action Center has obtained $189,000 from the U.S. Embassy through the International Development and Law Organization to monitor and train detectives of the Anti-Corruption Bureau and the anti-corruption prosecutor's office, Vitaly Shabunin, head of the center's management board, said on March 25.

Daria Kaleniuk, executive director of the center, said the NGO had not received any funds for the competitive hiring process for prosecutors.

The investigation is being carried out by the anti-corruption department set up in February and supervised by Deputy Prosecutor General Yury Stolyarchuk, reformist lawmaker from the Bloc of President Petro Poroshenko Serhiy Leshchenko wrote on Facebook on March 25.

The department is effectively overseen by Poroshenko Bloc lawmaker Ihor Kononenko and his ally Oleksandr Hranovsky, who is staffing the unit with his proteges, Leshchenko added. Kononenko and Hravnovsky face large-scale corruption accusations, although they deny them.

The investigation follows the publication by Shabunin on March 23 of what he says is a letter from Shokin to top prosecutors instructing them not to transfer graft cases to the newly-created National Anti-Corruption Bureau.

“This can only be interpreted as pressure on the organization,” Shabunin said on March 25. “Shokin is expected to be replaced with one of Shokin's deputies – Stolyarchuk or (Yury) Sevruk, who are severely criticized by the Anti-Corruption Action Center.”

Kutsenko denied claims that there was a political vendetta, saying that the prosecutor's office was required by law to check the NGO because of requests about the U.S. funds sent by Verkhovna Rada members.

“We will just make copies of their documents, and it will not block the center's work,” he told the Kyiv Post. “Nobody is talking about arrests, searches or repression.”

Kaleniuk told the Kyiv Post that prosecutors could have obtained a permit to wiretap the NGO, although Kutsenko said that he was not aware of such a permit.

“Poroshenko is flying away to the United States next week,” she said. “He will be in a very uncomfortable and difficult situation there (due to Shokin's actions). And if Poroshenko thinks that Shokin's dismissal alone will satisfy us and Ukraine's foreign partners, he's mistaken.”

She said that Sevruk and Stolyarchuk were Shokin's “tentacles,” and replacing Shokin with either of them “would not change anything.”

Sevruk may stay as acting prosecutor general for an indefinite period, while Stolyarchuk is reportedly the main candidate to replace Shokin, with Poroshenko supporters promoting his candidacy.

Stolyarchuk is responsible for all investigations at the prosecutor's office and stands accused of blocking them, although he denies this.

Alliance between Shokin and Yanukovych allies

The investigation into the U.S. funds comes amid a large-scale conflict between Sakvarelidze and Shokin.

Sakvarelidze says that Shokin, Sevruk and Stolyarchuk have been sabotaging efforts to prosecute top prosecutors Oleksandr Korniyets and Volodymyr Shapakin on bribery charges and cleanse the prosecutor’s office of corrupt and incompetent officials.

Sakvarelidze argues that Shokin could even be involved in the alleged corruption schemes of Korniyets and Shapakin, since a copy of Shokin’s passport and his land registration documents had been found in Korniyets’ house.

On March 25, Sakvarelidze joined about 150 demonstrators who protested against Shokin’s decision to fire subordinates of the Georgian-born reformer working on corruption cases against prosecutors, including the Korniyets-Shapakin case.

Earlier this week the Prosecutor General's Office published two letters calling for firing Sakvarelidze and accusing him of populism, immorality and violating the law.

The letters have been widely ridiculed as harking back to the obsolete Soviet tradition of issuing public letters against dissidents and the West.

One of the letters was signed by chief oblast prosecutors, prompting Shokin's opponents to question whether top members of the notoriously corrupt prosecution service have a right to assess Sakvarelidze's moral integrity.

The other letter was signed by Verkhovna Rada members from Odesa Oblast. These include Serhiy Kivalov, an ally of ex-President Viktor Yanukovych who is accused of rigging the 2004 presidential election; Dmytro Golubev, a lawmaker from the Petro Poroshenko Bloc who has been investigated by the U.S. Federal Bureau of Investigations on fraud charges; Vitaly Barvinenko, an ex-member of Yanukovych's Party of Regions, and Oleksandr Presman, another ex-Yanukovych ally accused of running a smuggling racket. They all deny the accusations.

The effective alliance between Shokin's team and discredited politicians linked to the Yanukovych regime has triggered a wave of public indignation.

Odesa Oblast Governor Mikheil Saakashvili argued on March 26 that the letter was revenge on Sakvarelidze for his criminal investigations against Golubov and his efforts to inspect Kivalov's tax payments and the governor's crackdown on smuggling at the Odesa customs office.

“I don't understand why the Prosecutor General's Office didn't publish dozens of my requests about top-level corruption and about Shokin blocking corruption cases,” Leshchenko wrote on March 26. “But they found room for the letter against Sakvarelidze. The main thing here is the list of those who signed it. Most of them should themselves be investigated by the Prosecutor General's Office.”

The situation became even more absurd when Korniyets, one of the top prosecutors arrested by Sakvarelidze, effectively supported Shokin in his conflict with the reformer. Konniyets said on March 27 he had filed a lawsuit seeking to cancel Sakvarelidze's appointment as a deputy prosecutor general.