Corruption and Anti-corruption in China: An Economic Perspective

Corruption and Anti-corruption in China: An Economic Perspective 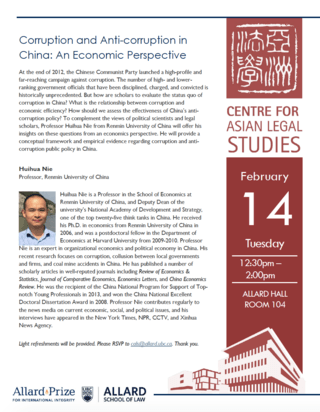 At the end of 2012, the Chinese Communist Party launched a high-profile and far-reaching campaign against corruption. The number of high- and lower-ranking government officials that have been disciplined, charged, and convicted is historically unprecedented. But how are scholars to evaluate the status quo of corruption in China? What is the relationship between corruption and economic efficiency? How should we assess the effectiveness of China’s anti-corruption policy? To complement the views of political scientists and legal scholars, Professor Huihua Nie from Renmin University of China will offer his insights on these questions from an economics perspective. He will provide a conceptual framework and empirical evidence regarding corruption and anti-corruption public policy in China.

Huihua Nie is a Professor in the School of Economics at Renmin University of China, and Deputy Dean of the university’s National Academy of Development and Strategy, one of the top twenty-five think tanks in China. He received his Ph.D. in economics from Renmin University of China in 2006, and was a postdoctoral fellow in the Department of Economics at Harvard University from 2009-2010. Professor Nie is an expert in organizational economics and political economy in China. His recent research focuses on corruption, collusion between local governments and firms, and coal mine accidents in China. He has published a number of scholarly articles in well-reputed journals including Review of Economics & Statistics, Journal of Comparative Economics, Economics Letters, and China Economics Review. He was the recipient of the China National Program for Support of Top-notch Young Professionals in 2013, and won the China National Excellent Doctoral Dissertation Award in 2008. Professor Nie contributes regularly to the news media on current economic, social, and political issues, and his interviews have appeared in the New York Times, NPR, CCTV, and Xinhua News Agency.

Light refreshments will be provided. Please RSVP to cals@allard.ubc.ca.

This is the second in a series of talks jointly hosted by the Allard Prize for International Integrity and the Centre for Asian Legal Studies. The first talk featured Randall Morck and you can view the event summary here.