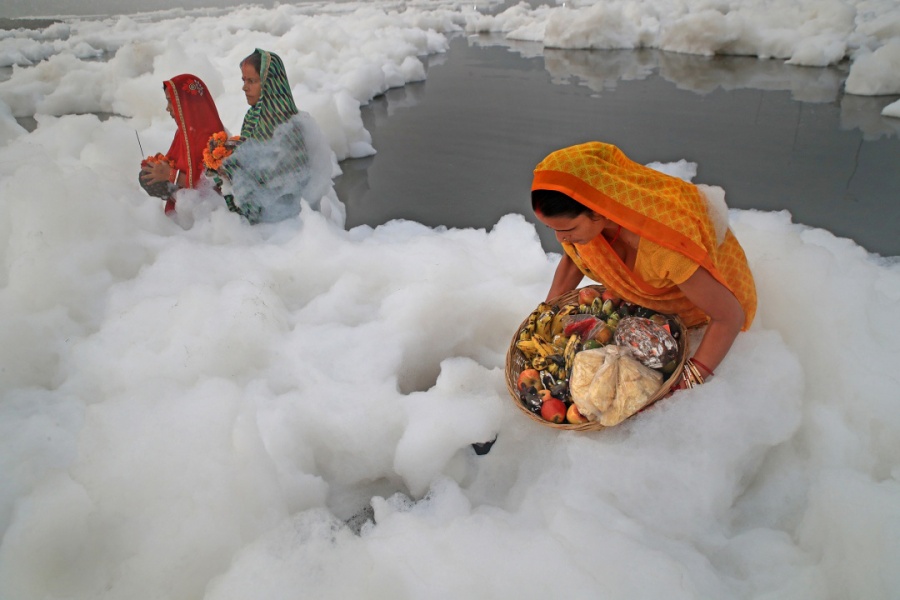 Women perform a ritual in the Yamuna River in India, celebrating a religious festival, honouring the river. The beautiful scene is incongruous with its reality: the women wade in deeply toxic water, the foam produced by chemical pollutants dumped into the river by surrounding factories.

The Yamuna river is the second-largest tributary of the Ganges River, which Is considered holy by Hindu people. The river is one of the main water sources for the 19 million inhabitants of Delhi. But the enormous demands on the river have left it polluted. Colossal quantities of water are siphoned from the river to irrigate local farmlands and provide clean water for Delhi. By the time the river reaches the city, the fresh water of the Yamuna is largely replaced by household sewage and industrial waste, creating a stagnant pool of toxic water.

Lack of oversight and safeguards combined with rapid urbanization have created unreasonable demands on the city’s infrastructure. Approximately one-third of Delhi residents live in illegal settlements lacking sanitation infrastructure, and their wastewater flows directly into the river untreated. Industry and manufacturing also heavily pollute the Yamuna; leather treatment, garment dyes, and other manufacturing produce significant chemical-laden wastewater that is dumped into the river. Delhi does have regulations on wastewater treatment and dumping, but corruption is rife, enforcement inconsistent, and competing and overlapping jurisdiction over the river largely prevents real accountability.