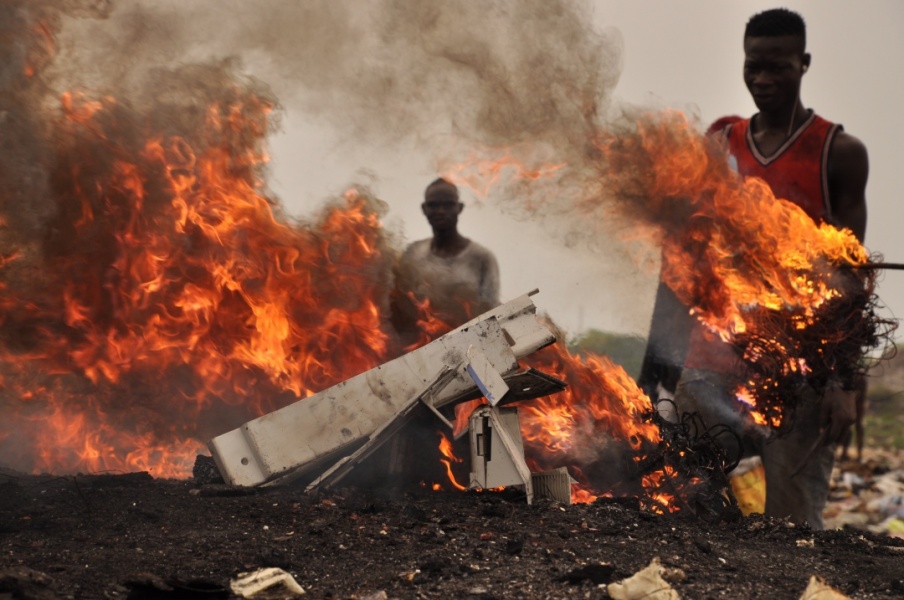 Two men burn electronic waste at the Agbogbloshie dump in central Accra, Ghana, one of the largest e-waste dumps and one of the most polluted places in the world. The dump receives close to 250,000 tons of e-waste each year, although experts suggest this figure is likely much higher.

Every day, an estimated 10,000 informal workers sort through mountains of e-waste, without protective gear or proper equipment, looking for valuable elements such as copper and gold. This dangerous work is largely carried out by the poor, many of whom are migrant workers from northern Ghana and neighbouring countries.

The adjacent settlement to the dump is home to approximately 80,0000 residents. The burning of e-waste components produces toxins that pollute the air and leech into nearby soil and groundwater, causing both workers and nearby residents to develop serious health conditions, including chronic headaches, skin disorders, hearing loss, DNA damage, respiratory illnesses, organ damage, immune system dysfunction, and cancer.  Exposure to these toxins also results in premature births and stillbirths, as well as congenital malformations, developmental disabilities, and behavioural changes in children. The local food supply is increasingly dangerous, with a single egg of an Agbogbloshie chicken found to contain 200 times the accepted European limit of chlorinated dioxins, which can cause long-term reproductive and developmental harm.

Developed countries export large volumes of second-hand computers and other electronic goods for “resale,” but the percentage actually resold or recycled is unknown. A 2019 study reports that 50 million tons of e-waste are generated each year, a figure expected to double by 2050, with only 20% of this waste properly disposed of or recycled. As consumption of electronic devices increases around the world, regulations for e-waste recycling and disposal are crucial to protect workers, citizens, and the environment.